Thought it appropriate to start another blog specifically for our groups planned WW2 game, scheduled for later in the year. Generally we are thinking of playing some minor skirmish level scenarios with a 1:1 figure to man ratio.
At this point we are only looking a very small figure levels, roughly squad/section sized combats. Eventually we hope to build this to platoon and even company level combats in the long term.
Andrew @ Deviant Designs Deeds has already painted roughly a platoon of British infantry and also has at least four tanks lined up (two German, two British) and has started work on a few German Werhmacht by Warlord Games. I have commited to buying the bulk of the Germans forces and so far have picked up around 40 Fallschirmjager and 50 plus Werhmacht from Warlord Games, Artizan and Wargames Foundry.
Rules wise we have not decided but looking at starting to play as soon as we can we may try out Operation Squad first as you literally only need a handful of figures each!

Operation Squad.
﻿
We may look at different rulesets at a later date such as Rules of Engagement -

Rules of Engagement.
Or Rate of Fire by Crusader Publishing - 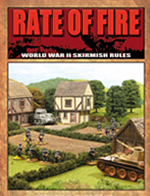 Rate of Fire.
I own all three of these ruleset but Andrew has suggested we could also look at I Ain't Been Shot Mum by Two Fat Lardies or Disposable Heroes & Coffin For Seven Brothers by Iron Ivan Games. 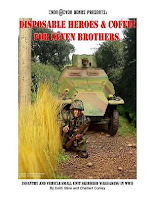 Will update this as and when but our Viking / Saxon (see Gjallerhorn) project remains the priority!﻿
Posted by wardy-la at 01:47