Thinking of a few ideas for possible scenarios and thought these look interesting.


Operation Deadstick.
Operation Deadstick was the codename for an airborne forces operation by the British Army that took place on 6 June 1944 as part of the Normandy landings. The mission's objective was to capture intact two road bridges in Normandy across the River Orne and the Caen Canal providing the only exit eastwards for British forces from their landing on Sword Beach. Intelligence reports said both bridges were heavily defended by the Germans and wired for demolition. Once captured, the bridges had to be held against any counter-attack until the assault force was relieved by commandos and infantry advancing from the British landing zone. 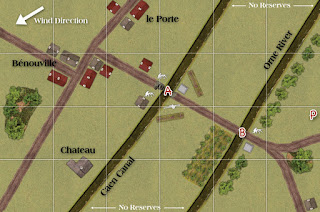 The mission was vital to the success of the British airborne landings. Failure to capture the bridges intact, or to allow their destruction by the Germans, would leave the 6th Airborne Division cut off from the rest of the Allied armies with their backs to the two waterways. If the Germans retained control over the bridges, they could be used by their armoured divisions to attack the landing beaches of Normandy.

Responsibility for the operation fell to the men of 'D' Company, 2nd (Airborne) Battalion, Oxfordshire and Buckinghamshire Light Infantry, part of the 6th Airborne Division. The assault group comprised a reinforced company of six infantry platoons and an attached platoon of Royal Engineers. They flew from the south of England to Normandy in six Airspeed Horsa gliders. Through what was later described as the "most outstanding flying achievements of the war", the gliders delivered the company to their objective. After a brief fire fight, both bridges were captured within minutes of landing, then successfully defended against tank, gun boat and infantry counter-attacks until the company relief arrived.

Operation Biting.
Operation Biting, also known as the Bruneval Raid, was the codename given to a British Combined Operations raid on a German radar installation in Bruneval, France that occurred between 27–28 February 1942 during World War II. A number of these installations had been identified from Royal Air Force aerial reconnaissance during 1941, but their exact purpose and the nature of the equipment that they possessed was not known. However, a number of British scientists believed that these stations had something to do with the heavy losses being experienced by RAF bombers conducting bombing raids against targets in Occupied Europe. A request was therefore made by these scientists that one of these installations be raided and the technology it possessed be studied and, if possible, extracted and taken back to Britain for further study. Due to the extensive coastal defences erected by the Germans to protect the installation from a sea-borne raid, it was believed that a commando raid from the sea would only incur heavy losses on the part of the attackers, and give sufficient time for the garrison at the installation to destroy the Würzburg radar set. It was therefore decided that an airborne assault, followed by sea-borne evacuation would be the ideal way to surprise the garrison of the installation and seize the technology intact, as well as minimize casualties inflicted on the raiding force.

On the night of 27 February, after a period of intense training and several delays due to poor weather, a small detachment of airborne troops under the command of Major John Frost parachuted into France a few miles from the installation. The force then proceeded to assault the villa in which the radar equipment was kept, killing several members of the German garrison and capturing the installation after a brief fire-fight. A technician that had come with the force proceeded to dismantle the Würzburg radar array and remove several key pieces to take back to Britain, and the raiding force then retreated to the evacuation beach. The detachment assigned to clear the beach had failed to do so, however, and another brief fire-fight was required to eliminate the Germans guarding the beach. The raiding force was then picked up by a small number of landing craft and transferred to several Motor Gun Boats which took them back to Britain. The raid was entirely successful. The airborne troops suffered only a few casualties, and the pieces of the radar they brought back, along with a German radar technician, allowed British scientists to understand German advances in radar and to create counter-measures to neutralize those advances.

Mervill Gun Battery Assault.
Just after midnight on 6 June, the 9th Parachute Battalion's advance party landed with the brigade's pathfinders, and reached the battalion assembly area without any problems. While some men remained to mark out the company positions, the battalion's second in command, Major George Smith, and a reconnaissance party left to scout the battery. At the same time, Royal Air Force Lancaster bombers started their bombing run, which completely missed the battery, their bombs landing further to the south. The pathfinders in the meantime were having problems. Those who had arrived at the correct drop zone found their Eureka beacons had been damaged when they landed, and in the smoke and debris left over from the bombing, their marker lights could not be seen by the pilots of the transport aircraft. The main body of the 9th Parachute Battalion and their gliders were to land at drop zone 'V', located between the battery and Varaville from 01:00. However, the battalion was scattered, with a number of paratroopers landing a considerable distance from the designated drop zone. Lieutenant-Colonel Otway landed with the rest of his "stick" 400 yards (370 m) away from the drop zone at a farmhouse being used as a command post by a German battalion; after a brief fire-fight, they helped other scattered paratroopers, and reached the drop zone at 01:30. By 02:50, only 150 men had arrived at the battalion's assembly point with 20 Bangalore torpedoes and a machine gun. The mortars, anti-tank gun, mine detectors, jeeps, sappers and field ambulance section were all missing.

Aware of the time constraints, Otway decided he could wait no longer, and the reduced battalion headed for the battery and joined up with Major Smith's reconnaissance party just outside the village of Gonneville Sur Merville. The reconnaissance party had cut a way through the barbed wire, and marked four routes through the minefield. Otway divided his men into four assault groups, and settled down to await the arrival of the three gliders.

In England, one of the gliders never left the ground, as its tow rope had snapped on taxiing. The other two gliders, unable to locate the battery, did not land where expected. On their run in, both gliders were hit by anti-aircraft fire. One landed around 2 miles (3.2 km) away, the other at the edge of the minefield. The troops from this glider became involved in a fire fight with German troops heading to reinforce the battery garrison.

Otway launched the assault as soon as the first glider overshot the battery, ordering the explosives to be detonated to form two paths through the outer perimeter through which the paratroopers attacked. The defenders were alerted by the explosions, and opened fire, inflicting heavy casualties; only four attackers survived to reach Casemate Four, which they disabled by firing into apertures and throwing grenades into air vents. The other casemates were cleared with fragmentation and white phosphorus grenades, as the crews had neglected to lock the doors leading into the battery. During the bombing raid, the battery's guns had been moved inside the casemates and the steel doors left open for ventilation. During the battle, 22 Germans were killed and a similar number made prisoners of war. The rest of the garrison escaped undetected by hiding in the underground bunkers.

Steiner was not present during the bombing, but at a command bunker in Franceville-Plage. After the raid, he set out for the battery, but was unable to gain entry due to the volume of fire from the British paratroopers. At the same time, a reconnaissance patrol from an army Flak unit with a half track mounting a large anti-aircraft gun arrived. The crew had intended to seek cover at the position, but instead used the gun to engage the paratroopers.

With the battery in their hands, but no sappers or explosives, the British gathered together what plastic explosives they had been issued for use with their Gammon bombs to try to destroy the guns. By this time, Steiner had returned to Franceville-Plage, and directed his regiment's 2nd and 3rd Batteries to fire onto the Merville Battery.

Just before 05:00, the battalion's survivors, just 75 men of the 150 who had set out, left the battery and headed for their secondary objective, the village of La Plein. The battalion, being too weak, only managed to liberate around half of the village, and had to await the arrival of the 1st Special Service Brigade later in the day to complete its capture. After the British had withdrawn, the Germans reoccupied the battery position. Steiner was unable to see Sword Beach from his command bunker, so even though he was able to get two of his guns back in action, he was unable to direct accurate fire onto the landings. However, observers with the 736th Infantry Regiment, holding out at La Brèche, were able to direct his guns until that position was neutralised.
On 7 June, the battery was assaulted again by two troops of commandos from No. 3 Commando, part of the 1st Special Service Brigade. The attack in daylight was repulsed with heavy losses to the commandos. As they withdrew, they were engaged by the battery's guns firing over open sights. The British never succeeded in completely destroying the battery, and it remained under German control until 17 August, when the German Army started to withdraw from France.

(from Wikipedia and other sources)
Posted by wardy-la at 12:45