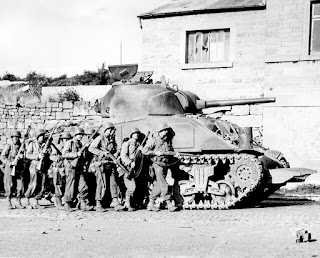 US troops and a Sherman with Culin hedgerow cutter advance on a Belgian town.

The M4 was originally designed to replace the (stopgap) M3 medium tank, as a medium tank armed with a 75mm gun in a turret, and using many of the components of the M3 to speed production. Two versions of the tank went into production at the end of 1941. The M4 was a tank with a welded hull, characterized by the sharp cornered hull shape, while the M4A1 featured a cast hull with a more rounded shape. The reason for the two styles was that, in order to meet production targets, factories without the ability to handle hull castings were used. These firms could not produce the large armor castings needed for the M4A1 hull, but they were able to produce the welded M4 hull. (In the end, the welded hull variants out-numbered the cast hull versions.) 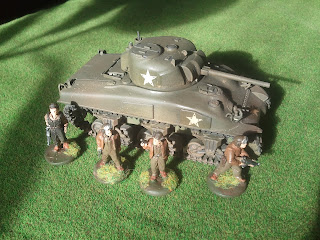 Sgt. Bill Hey and crew take time out of the cramped interior of their tank.


When the tank first entered combat in North Africa in 1942, it was quite successful, but combat experience showed a number of changes were needed. Some of the changes involved improving protection, as the tank’s armor was insufficient to stand up to the larger German guns. Additional armor was added at the depot level, by welding additional armor over vulnerable areas, such as the ammo storage bins. This armor was called “applique armor”. Additional soft armor was added by crews in the field. This took the form of sandbags, logs, tracks, and other similar materials. This type of add-on protection didn’t really help against anti-tank cannon fire, but was effective against Panzerfaust (Germany’s version of the bazooka) rocket propelled HE rounds. 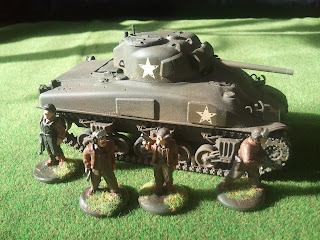 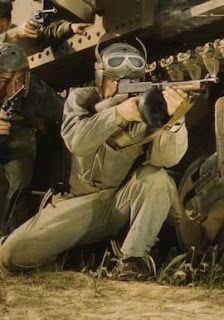 The British-developed Sherman Firefly was up-gunned with the 17 pdr. gun. The 17 pdr. also was 76 mm and had a L/55 barrel, but it introduced a much bigger charge which allowed it to penetrate 140 mm at 100m and 120 mm at 1000m using Mk.IV shot. This gun allowed the Firefly a slight firepower advantage over the Panther, although the blinding muzzle flash due to unburnt powder from the increased charge was a handicap. 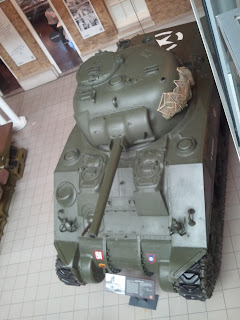 Sherman at the Imparial War Museum.

The U.S. Army restricted the Sherman's height, width, and weight so that it could be transported via typical bridges, roads, and railroads. This aided strategic, logistical, and tactical flexibility. 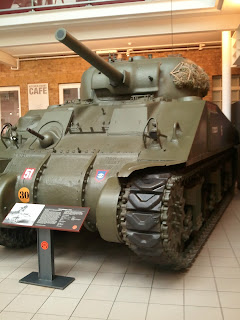 Sherman at the Imperial War Museum.

The Sherman had good speed both on- and off-road. Off-road performance varied. In the desert, the Sherman's rubber tracks performed well. In the confined, hilly terrain of Italy, the Sherman could often cross terrain that some German tanks could not. 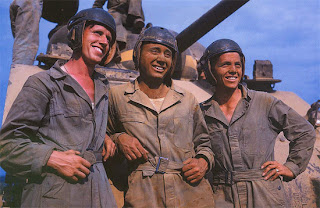 A typical checklist of a tank crews equipment can be found on the Patton's Troubleshooters website.
M4 Sherman on Wikipedia.